ARTICLE
Leprosy – an ancient disease of modern times
​Featured in UCM News Winter 2022
22 November 2022
We might think of leprosy as a disease of ancient times, which was referred to in the Bible, destroyed many lives and feared by all.

Leprosy is mentioned many times in the Bible, in both the Old and New Testament. It is described as a scourge, a curse and a terrible affliction requiring cleansing. In Matthew 8:1, Mark 1:40 and Luke 5:12 we read how Jesus cured a man with leprosy. In all three Gospels, the man begged Jesus to cure him. Jesus, filled with compassion for the man’s plight, did so.

In the Middle Ages, St Francis of Assisi followed in the footsteps of Jesus. As a young man, a chance encounter with a man with leprosy transformed his life forever. He left his wealthy family and comfortable lifestyle and began a new life of poverty. Francis followed what he felt was God’s calling. He rejected money and wealth and preached about returning to God and obedience to the church.

In more recent times, the Roman Catholic priest, Father Damien  (1840-1889) now known as St Damien of Molokai, cared for leprosy outcasts on the island of Molokai. He arrived at the settlement on 10 May 1873, to find six hundred people with leprosy living in impoverished conditions. During his ministry, he shared his life with the community providing both medical and emotional support. He also built houses, schools, roads, hospitals, and churches. This incredible calling transformed the lives of those living in this once lost community.

Many other notable individuals have dedicated their lives to caring for people with leprosy, including the nurse Kate Marsden (1859–1931) who founded St Francis Leprosy Guild, the philanthropist Raoul Follereau (1903–1997), who founded the leprosy charity Fondation Raoul Follereau and Mother Teresa of Pakistan, the physician, Dr Ruth Pfau (1929-2017).

What about leprosy now?

Leprosy is also one of the most stigmatised diseases on earth. A leprosy diagnosis is a life sentence for some, often considered a curse from God and the result of sin. Many people with leprosy are thrown out of their homes, communities, or forced to leave their employment leading to a life of begging. Leprosy is still a legitimate reason to divorce in some countries. It is also a reason that anyone fearing that they may have caught leprosy, is too frightened to ask for a diagnosis.

Think how often we hear the word “leper” used in a derogatory fashion.

Hundreds of leprosy communities (sometimes referred to as colonies) still exist in remote locations throughout the world where people ostracised by leprosy, live out the rest of their lives.

As Archbishop John Wilson said in his address at St Francis Leprosy Guild’s 125th anniversary Mass in London last year: “if we think leprosy is a thing of the past, then we are sadly mistaken.”

The reality experienced by millions of people today, is that leprosy is a disease of modern times, and one that is still destroying lives. 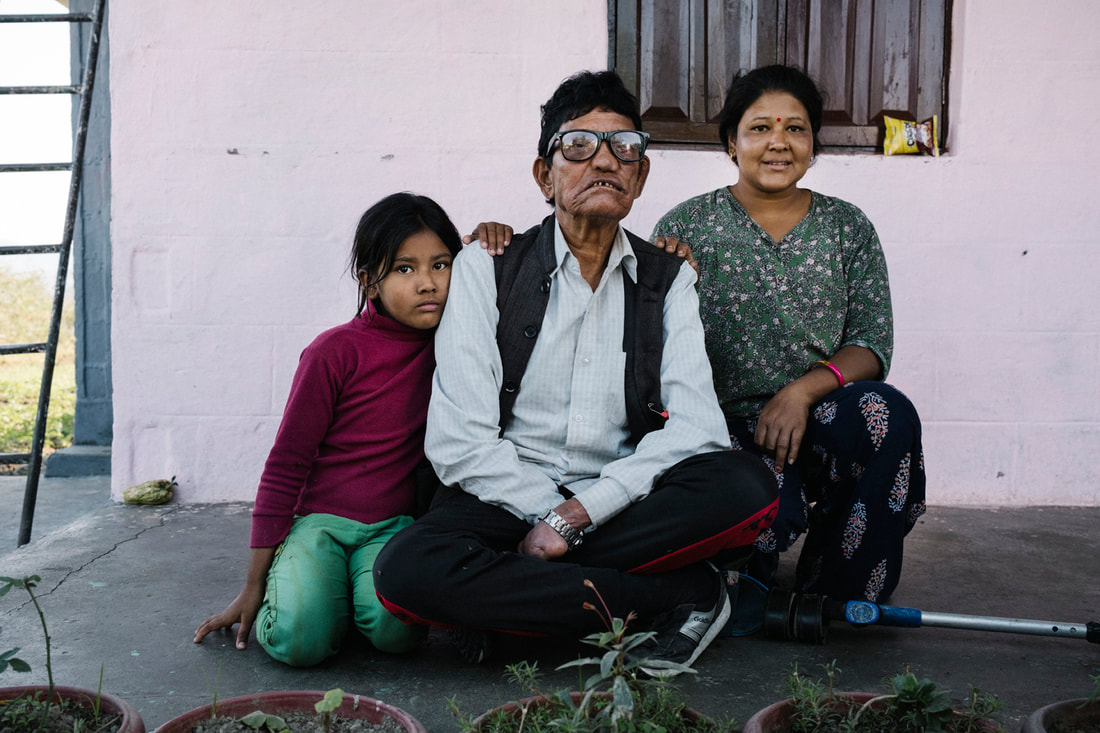 Photograph of Dal with friends or relatives by kind permission of Tom Bradley
This is Dal Bahadur Pariyar (centre) who lives at the Lamatara Leprosy Settlement, south of Pokhara in Nepal. Dal has been affected by leprosy since he was five years old. He said: “I was abandoned when I was very small. I was isolated in a small cottage from the age of eight, where I lived for four years." Dal has received no education. By the time he was diagnosed and treated for leprosy, his eyes, face, hands, and feet were all disabled or affected by the disease. He moved to Lamatara about thirty years ago when the small settlement was built. He has nobody to care for him since his wife died of leprosy two years ago. He needs a walking stick to get around and his eyesight is failing. “I don’t have limbs” he says talking about his lack of fingers, “and my eyes are getting poorer. What will happen to me in a few years’ time? How will I wash, cook, or clean?”

So, what is leprosy?

Is leprosy infectious and how is it spread?

There is a widespread fear that leprosy is a highly contagious disease. In reality, it is difficult to catch and ninety-five percent of us are naturally immune. Doctors and scientists are not sure exactly how leprosy is spread, but it is thought through airborne droplet infection such as from coughing and sneezing. Prolonged and close contact with someone with undiagnosed leprosy, such as between a parent and child, friends, or neighbours, may also contribute. People with depleted immune systems or who have poor nutrition, drink unsafe water, and live with inadequate sanitation are more likely to catch leprosy. 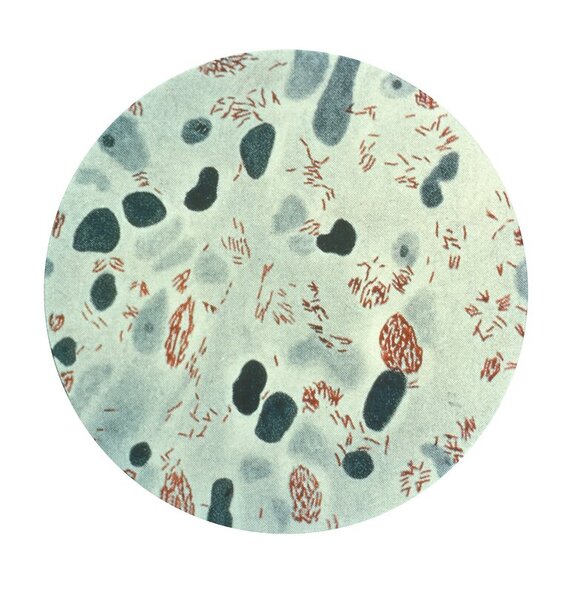 Graphic image of Mycobacterium leprae, the bacterium that causes leprosy. Licensed from ALAMY.
Can leprosy be cured?

A bacterium causes leprosy and it can be cured by a combination of antibiotics, called multidrug therapy or MDT. MDT is available throughout the world to treat people with leprosy if they can be found and diagnosed. Since the 1980s, over sixteen million people have been cured of leprosy.

So why are so many people still affected by leprosy today?

There are many, complex reasons why people catch leprosy today and, even if treated, remain affected by the disease. For example, leprosy is difficult to diagnose at its early stages, before any visible disabilities start to appear. Initially leprosy shows on the skin as numb patches and is often misdiagnosed as other skin complaints such as eczema or scabies.

Although research is underway, there is no easy-to-use, diagnostic test to diagnose leprosy. The only reliable method to diagnose leprosy, is a skin biopsy that needs to be analysed in a laboratory. In some people, leprosy may incubate for up to twenty years before showing any visible signs. This long incubation phase means that undiagnosed individuals may unknowingly spread leprosy within their communities for years.

Unlike some neglected tropical diseases which can be cured by mass drug administration, leprosy is more complex, requiring longer drug treatment, more monitoring and long-term care. People with leprosy who have been cured of the disease and who are no longer infectious, may face considerable resistance from their families or communities and not be allowed to return to their homes.

Where is leprosy found?

It is no surprise, that leprosy is found in some of the poorest countries in the world, sometimes those with a troubled or war-torn past. Brazil, Indonesia, and India account for 80% of people with leprosy, but Angola, Bangladesh, DR Congo, Ethiopia, Madagascar, Mozambique, Nepal, Nigeria, Somalia, South Sudan, Sri Lanka, Sudan, and Tanzania are all endemic for leprosy.

​Leprosy is reported in over one hundred out of 195 countries worldwide today. That means over half of all countries have leprosy. 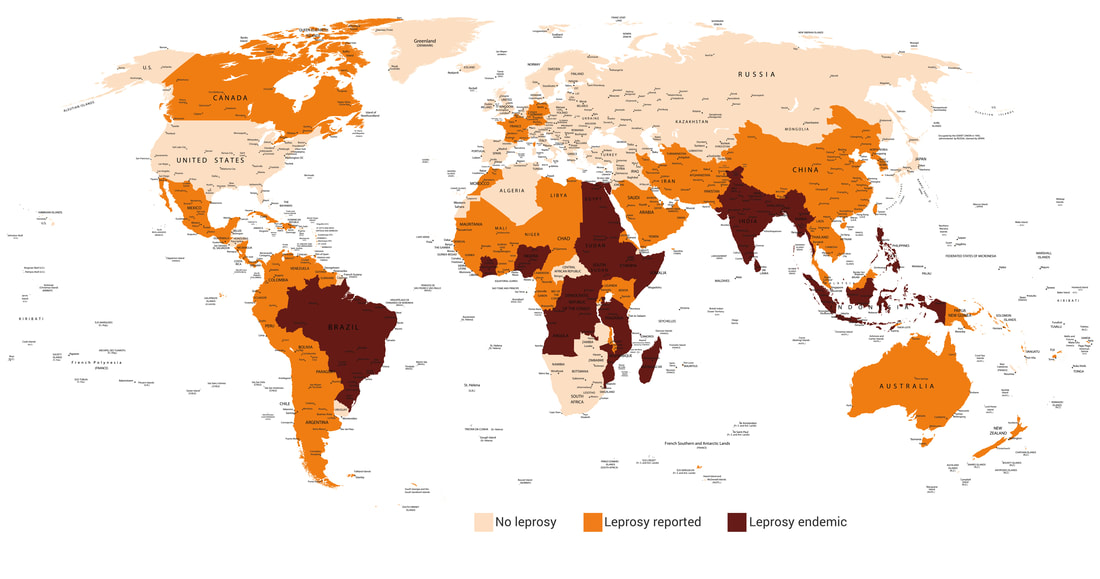 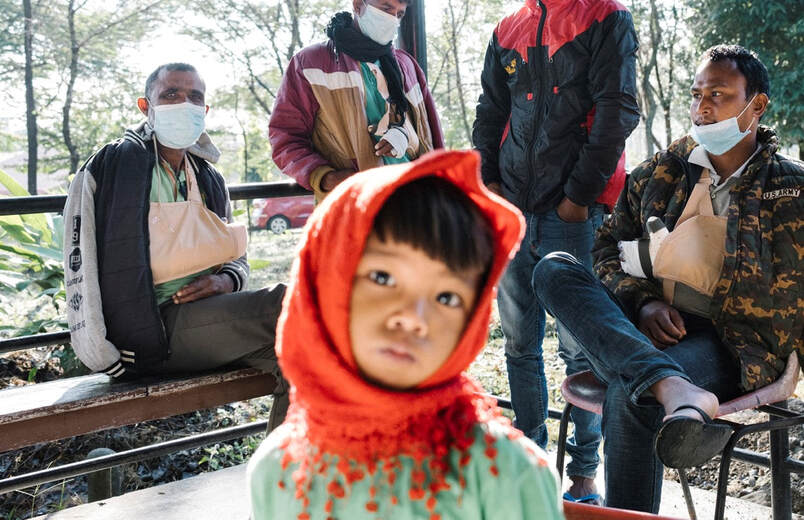 How do we care for people with leprosy?

Caring for people with leprosy means treatment with MDT, surgery to improve leprosy disabilities, the long-term treatment of leprosy ulcers, and reintegrating people affected by leprosy back into society.

Thanks to the generosity of donors, leprosy centres and communities exist throughout the world to care for people living with leprosy. The doctors, nurses, nuns, and volunteers who work there often dedicate their entire lives or careers to caring for people with leprosy.

So, will we ever see an end to leprosy?

For us to see an end to leprosy, new strategies have been developed to find and treat everyone with the disease. This so-called active case-finding requires a complex combination of organisation and planning, healthcare skills, data collection and recording to find people who have leprosy, diagnose, and treat them, and their families, friends, and neighbours, and monitor their progress and health over time. The good news is that if we can find everyone with leprosy, village by village, town by town, city by city, and country by country, we can stop leprosy in it tracks. But we are not there yet, and far too many people are affected by leprosy in the world today.

What can I do to help see an end to leprosy?

Any kind of fundraising would be welcome such as a coffee morning, a quiz, "bring-and-buy," concert, a sponsored run or anything else that your congregation or friends might enjoy. Those funds would help rid the world of this terrible  disease. And as always, your prayers would transform the lives of people with leprosy.

Following the recitation of the Angelus in St Peter’s Square earlier this year, the Holy Father Pope Francis noted that it was 30th January, World Leprosy Day. This date was chosen by Raoul Follereau, dating back to 1954, and used to increase awareness of leprosy every year. Pope Francis expressed his closeness to those who suffer from this disease and prayed that they will not lack spiritual support and healthcare. He said: “it is necessary to work together for the full integration of these people, overcoming any discrimination associated with a disease that unfortunately still affects so many, especially in the most disadvantaged social contexts.”

St Francis Leprosy Guild
​
St Francis Leprosy Guild (“SFLG”) is a UK-based, Roman Catholic charity that is working towards a leprosy-free world. The charity supports the work of over forty leprosy centres, clinics, hospitals, care homes and leprosy-related projects in thirteen countries where leprosy is endemic. The charity’s TRACE operating strategy is putting an emphasis on active case-finding; early detection of leprosy followed by treatment with MDT.
Click on this link to hear Archbishop John Wilson on the subject of leprosy
For information about leprosy please read our Q&A
​
For more information please contact: