These children in the River Purus region of the Amazon are supported by the work of Dr Tony and her team.  The Guild has supported her work for a number of years.  Read her story here.
PLEASE NOTE: Due to measures adopted by St Francis Leprosy Guild in light of COVID-19, the offices are now closed (with staff working remotely) until further notice. However, we can still be contacted via telephone (07754 592240) and email (enquiries@stfrancisleprosy.org).
​
If you have recently sent a donation to the Guild, please accept our apologies as it may take a little longer before we are able to process your gift and acknowledge your support.

Join us in celebrating the 125thanniversary of the founding of the Guild. Click here to join a streamed celebration of the work of the Guild at 11am on Saturday 24 October. The video will be available on this site until the end of November 2020.
​The St Francis Leprosy Guild supports projects around the world.  All support is given regardless of race or religion to those affected by leprosy. Since 1895 the Guild has provided support to families and dependents of those affected by leprosy in Bangladesh, Brazil, DR Congo, India, Nigeria, Tanzania, Vietnam and many other countries.​
​
Campaign to end leprosy one community at a time

The work of St Francis Leprosy Guild has changed over the past years. The development of successful multi-drug therapy has meant that more and more people have access to the drugs that will halt leprosy. More than 16 million people have been successfully treated.

But leprosy has not been beaten – yet. By the year 2000 the number of new cases had reduced to around 200,000 each year. But that’s where we still are today.  St Francis Leprosy Guild is committed to supporting the World Health Organisation’s strategy of "Accelerating towards a leprosy-free world”. The challenge today is to reach out to detect cases of leprosy where and when they emerge so that transmission of the disease can be prevented. The outreach to detect new cases means training local primary health care workers in leprosy detection and treatment.

The Guild is a small organisation but with your help we are having a significant impact. The outreach projects that we have supported with your generous donations were involved in detecting nearly 2% of the world’s new cases of leprosy last year alone. An end to leprosy is tantalisingly in sight and the Guild is determined to play a part.
​
Look out for our campaign advertisements in the press over the next months you can donate at https://www.justgiving.com/stfrancisleprosyguild 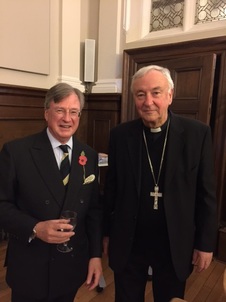