ST FRANCIS LEPROSY GUILD
​​St Joseph’s Leprosy Hospital began as a single hut in 1949. During the past 70 years, it has treated over 20,000 patients.

There are now 47 residents living at the hospital who caught leprosy when they were children. The sisters and staff at St Joseph’s have cared for them throughout their whole lives. As well as treating leprosy, St Joseph's focus is on the physical and social rehabilitation of the residents. SFLG is proud to have supported St Joseph's work since its foundation.
Rajee (aged 61, lives at St Joseph's)
​When Rajee was just 18 years old, she fell very ill. She suffered from fever, chills and night sweats and often numbness in her hands and feet. Sadly, Rajee's condition was not diagnosed, and as time went on, she lost her ability to walk and developed nodules on her face.

At 25, her parents left her at a convent for disabled people in the care of the nuns where the sisters looked after for her for seven years. Rajee went on to develop red skin patches all over her body and an ulcer on her leg ulcer. It took 14 years for a proper diagnosis of leprosy to be made.

Rajee expresses huge gratitude for all that has been done for her. She says: it was an unknown disease which brought me to this unknown place but God brought me here. I am happy, feel secure, grateful and content. Here I am well accepted, treated with right diagnosis and will be taken care of for the rest of my life. FMM Sisters and staff in St. Joseph's take care of me and my companions, accept us as we are, with human dignity, providing job opportunity which makes me feel worthy and self-confident. I am grateful to God and people who support us and provide us with basic needs”. 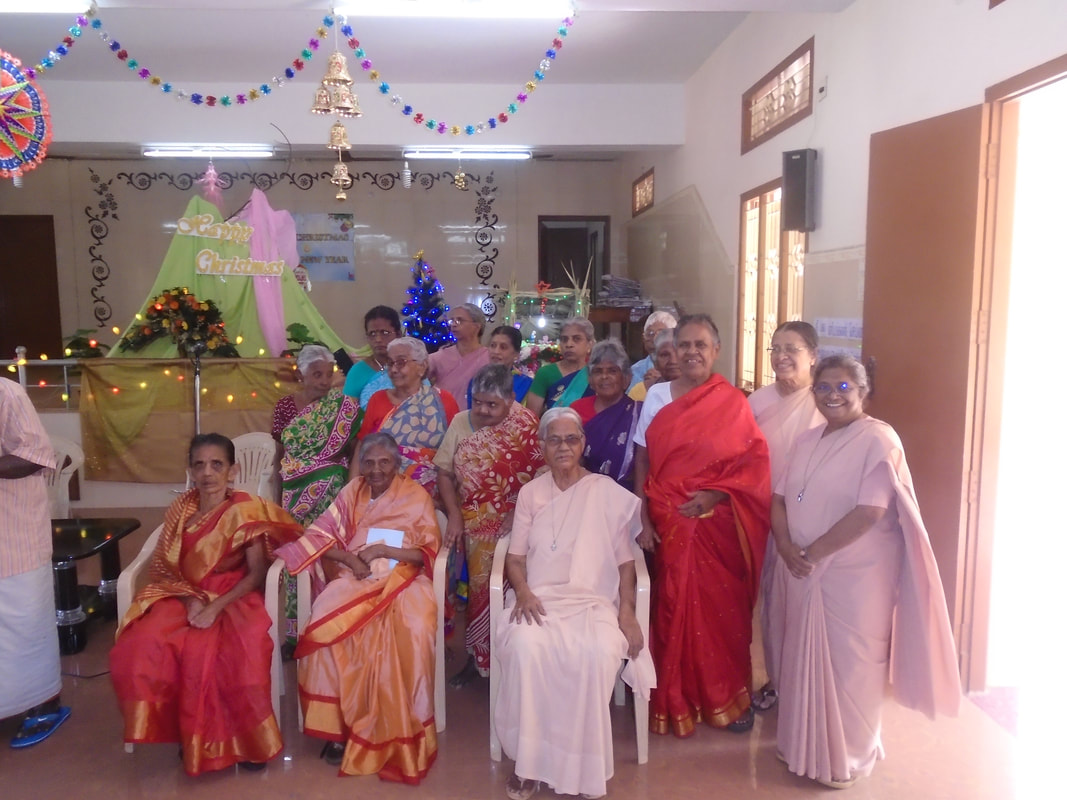 Female residents and staff enjoying Christmas at Tuticorin
Xavier (aged 84, lives at St Jospeh's)
​After being born prematurely and incubated for several months, Xavier developed high blood pressure. His parents found him hard to cope with and he was brought up by his uncle. After sustaining a football injury as a child, he lost a lot of blood, but felt no pain, instead experiencing fever and chills.

As an adult, his leg wound continued to trouble him and he developed clawed hands and thickened earlobes. He was eventually referred to St Joseph’s at the age of 21, where he was treated with Multidrug Therapy. He realised he had been suffering with leprosy for the past eleven years.

At St Joseph's, Xavier was trained in electrics, and now takes care of the electrics at the centre. He also helps run education and awareness programmes about leprosy and teaches children and adults to read and write. All of these activities have helped fulfil his sense of purpose and direction.

I am a miracle of God. God chose me from the beginning of my birth as I was brought up in the incubator for several months. God brought me here for a special purpose though leprosy, I am happy for God has given me a long life. The Franciscan Sisters of Mary have been taking care of me from the day I came here till today with great love and human dignity.  Now I am 84-year-old. I am able to walk and do whatever I am able to do. I am alive and active because of God’s providence through the sisters, their selfless service and their regular care. I feel happy because I am a miracle of God and I am healed by Jesus. 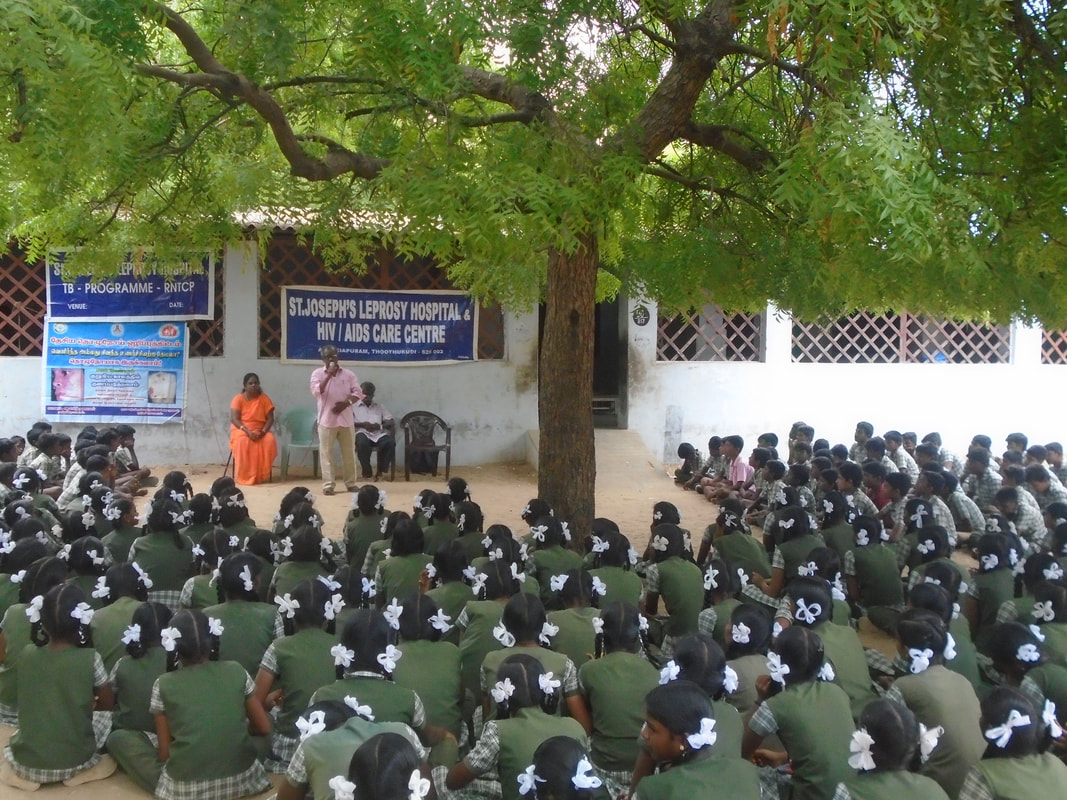 School children being made aware of leprosy at St Joseph's
Lingammal (aged 85, lives at St Joseph's)
​Lingammal was already married at the age of 15 when she developed patches and modules on her face and body, and numbness in her hands and feet. Despite the severity of her symptoms, her family insisted on her treatment by a local doctor. When she could no longer walk, she was finally referred to St Joseph’s.

Lingammal refused to be admitted to St Joseph's, frightened by the deformities of the other patients. She remained home for the next ten years, receiving treatment as an outpatient. She finally agreed to be admitted at the age of 25, when she realised the seriousness of her health.

By this time, Lingammal had clawed hands, rashes over her body and ulcers on both feet. She received various treatments, including Multidrug Therapy for two years.

​Despite deformities in her fingers and toes, she has learned how to make baskets from wire and bamboo. She has also taught other patients this skill, giving her a focus and a purpose during her time there. The other good news is that Lingammal's family have been educated about leprosy and they come to visit her regularly.

I am happy and content in St Joseph’s.  The place I refused to stay at became my shelter for the rest of my life. I have my sister’s children who come and see me regularly. My husband passed away two years ago. Sisters belonging to Franciscan Missionaries of Mary take care of me so well. I believe that God has brought me here and he does care of me through the holy nuns here. I was a Hindu and I am converted as a Catholic with deep faith and conviction. I am grateful to God, nuns and all who support us for our basic needs. 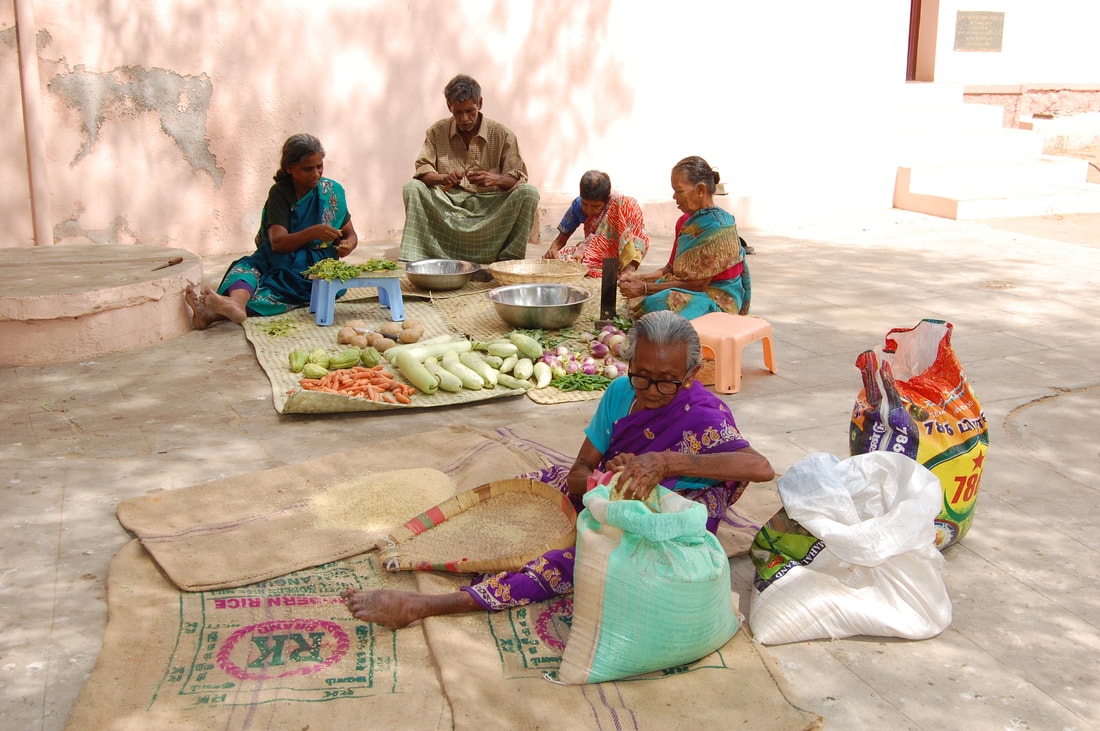 St Joseph's and a meal in preparation.