ST FRANCIS LEPROSY GUILD
​Missionary Sisters refuse to give up on leprosy patients
​
Hendala Leprosy Hospital was built in 1708, and at one time, housed 900 patients. It is one of the oldest leprosy hospitals in South Asia. Hendala was taken over by the Government in 1964 but the Missionary Sisters insisted on seeing the patients there and refused to abandon them.

​The Sisters hold monthly clinics for both in and outpatients, and provide medicines and support to patients and their families in faraway villages. SFLG has been funding Hendala for over 70 years.

He said: Without the support of this centre I would not be able to meet my daily needs. I’m grateful to all of them and those who are taking interest in us. We keep our trust and confidence in them. What I would like the world to know about leprosy is that now there is nothing to be fear of if you can begin to take treatment from the hospital. They should begin to take medicine as soon as possible and to be faithful to the advice of the doctors.

She said: What I would like the world to know about leprosy is that do not to get frightened because we have medicine (no deformities because of the new medicine and exercises.)

Dayasilee (57, at home ​in Wallala)
​​At the age of 24, Dayasilee had finished her studies and returned home. She developed swelling in her right hand and leg, as well as a loss of sensation. After seeing several doctors, a biopsy confirmed that Dayasilee had leprosy, and that her bones were already beginning to decay. Sadly her legs could not be saved and following their amputation below the knee, she was admitted to Hendala.She was very distressed about the loss of her legs, and also frightened as she and her family knew so little of the disease. But she undertook treatment and her leprosy was cured.

In 2001, Dayasilee got married and now has a son and daughter. At their monthly visits, the Sisters provide medicine, wound dressing, nutrition and dry rations, glasses and anything that’s needed. They also helped them with house repairs and give a monthly allowance for their children’s education.

As Dayasilee's husand has cancer, he cannot support the family. She says that without Hendala, "I would not be able to survive. Our family depends on what the centre gives. Two children’s education and our entire livelihood depend on the nuns who support us.”

Dayasilee’s focus is now on supporting her children through their education and continuing exams. 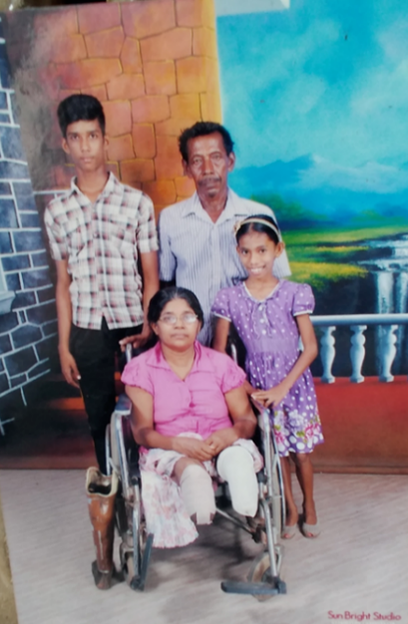 She said: What I would like the world to know about leprosy is that now there is nothing to be fear of the sickness. Please visit a doctor and get the treatment.”