PRESS RELEASE
When is elimination not elimination?
When it is leprosy     ​
St Francis Leprosy Guild, London, UK, 11 April 2022: the elimination of a disease is usually considered a good thing. When fewer than one person in 10,000 has leprosy, the disease may be declared eliminated, or no longer a public health problem.

According to its Leprosy Control Program, Nepal has sustained the elimination of leprosy as a public health problem at the national level since 2010. But this declaration also concealed a terrible truth. In 21 districts out of 77, leprosy was not eliminated at all. For example, in Gandaki Province, Pokhara, where SFLG's partner, Green Pastures Hospital is located.

Gandaki Province, Pohkara
When the elimination of leprosy was declared in 2010, government health services were scaled back with terrible results for people with the disease. The provision of healthcare for leprosy or leprosy-related disabilities such as ulcers was reduced and the knowledge and ability to diagnose leprosy declined.

Now, for every thousand people in Nepal, there are eight who live with leprosy. People are living with lifelong disabilities, ulcers that won't heal or, they become subject to the stigma and discrimination caused by leprosy. This figure is two and a half times higher than the global average.

Long queues for treatment outside Green Pastures Hospital, Pokhara
According to Dr Sharma, even experienced healthcare professionals struggle to diagnose leprosy in its early stages, when the disease can be readily confused with scabies, psoriasis, or other skin disorders. ​
If leprosy is allowed to develop unchecked and untreated, it can be spread, unknowingly into communities and cause life-changing disabilities. It is estimated that four million people are undetected or affected by leprosy worldwide. ​
Ujeli's story

Ujeli is 65 years old. She caught leprosy many years ago and by the time she was diagnosed, her hands were severely disabled by leprosy. Eventually her right hand was so badly affected by leprosy, it was amputated. She has lost fingers on her left hand and her her toes due to the damage caused by leprosy ulcers. She is totally dependent on her family for her survival and she fears that they will eventually abandon her.

Ujeli's is a true story. This is what happens when leprosy is not diagnosed and not treated soon enough. There is no happy ending. ​ 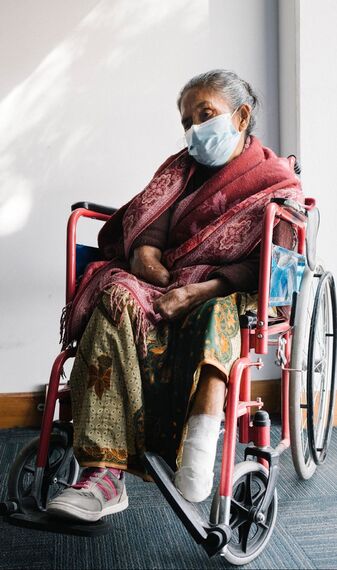 Nepal is one of the poorest countries in the world. But its landlocked position, unemployment rate, lack of safe water and poor infrastructure are not its only challenges. Leprosy is greatly feared. Leprosy is a contagious, chronic, neglected tropical disease. If left untreated, it will progress and cause life-changing disabilities: blindness, ulcers and the loss of limbs. It can also spread to others. ​Leprosy was declared eliminated in Nepal back in 2010. That declaration led to serious consequences for people with leprosy. Healthcare for the treatment of leprosy or leprosy-related disability was scaled-back and the knowledge and ability to diagnose leprosy began to decline. ​Nepal is a WHO global priory country for leprosy.
Green Pastures Hospital, Pokhara
​
​Green Pastures Hospital treats and rehabilitates patients affected by leprosy by providing Multidrug Therapy, surgery, counselling by former patients, self-care training for patients to prevent leprosy ulcers and impairments from developing and assistive devices such as wheelchairs and prosthetic limbs. The hospital treats around 25,000 people every year and there is no charge for people with leprosy. ​
For information about leprosy please read our Q&A
​
For more information please contact: