Due to the stigma of being called "a leper", a law was passed in Brazil in 1995, ruling that leprosy should always be referred to by its scientific name, Hansen’s Disease. Despite this ruling, the individuals below have asked not to be identified in any photographs and we have used acronyms instead of their real names.

The Ipiranga Committee Association, led by Doctor Antonia Lopez Gonzalez, known as Dr Tony, operates in the River Purus area. Against a deluge of Covid-19 suffering during 2020 and the early part of 2021, Dr Tony's team is still fighting leprosy, with thousands of cases diagnosed each year.

Many people with leprosy live in rural areas where access to medical facilities is scarce. The team, funded partly by SFLG grants, reaches people that otherwise could not be found, by navigating along the Purus River in a hospital boat.
Carlos (22, lives at home in the Purus River area, Amazon.) 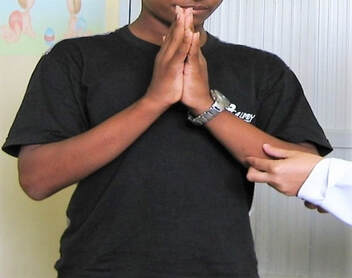 Carlos, 10 years after treatment, now with movement restored in his fingers.
Carlos was only 10 years old when he became worried about his fingers. He lived in a rural area with his family, with little access to medical care. He hid his symptoms from his family as he had been in contact with people with leprosy. There was no regular school, and Carlos instead helped his family to obtain food and water.

Carlos had pain in his arms and fingers then his little fingers became atrophied (meaning that they could not move). His symptoms were discovered during a routine check up visit, and he was diagnosed with leprosy.

Carlos was frightened that his fingers would have to be removed and that he would be rejected by others. But he was given both treatment and physiotherapy by Dr Tony and her team. Crucially, he was enrolled in school to receive an education and build a future for himself.

Carlos stayed in the centre for about four years, and the team still brings food to his home. They also provide moral support and self-care advice. Without them, Carlos says “I would have lost my fingers and hidden in the forest and disappeared for fear of rejection”. Now, Carlos simply wants to take care of his family.

Hansen's Disease has a cure!

​Adriana (25, lives at home in the Purus River area, Amazon.) 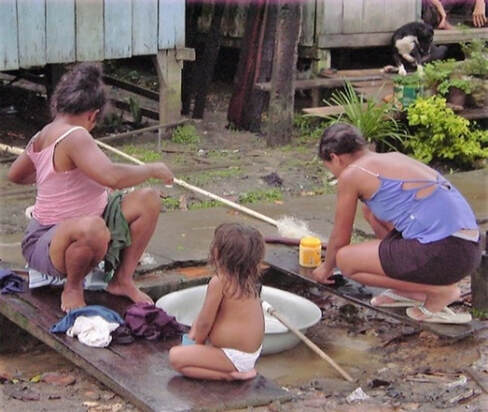 Adriana happily spending time with her daughter, having been cured after several years of treatment.
At 16 years old, Adriana was married and pregnant with her first child. She developed lumpy patches on her legs, a fever and frequent fatigue. During a home medical visit, a skin examination revealed she had leprosy and she went to the hospital to begin treatment.

Adriana suffered severe leprosy reaction after the treatment and feared losing her baby. It was a huge relief when she had a successful birth, and her first daughter was born unaffected by leprosy. During the first two years of MDT, Adriana received weekly home visits and baskets of food from the team.

They still support her with food and self-care. Without them, Adriana simply states that she would have lost her daughter. And now, she wants to care for her family, and give back by helping the Hansen’s Disease programme.

That it (Hansen’s Disease) has a cure, and that we do not have to be rejected”
​ 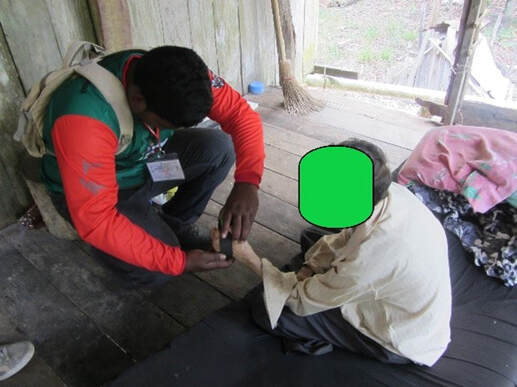 Joao receiving a home visit and help with his orthopaedic device
At 12 years old, Joao was living with his family and labouring as a rubber worker. He developed marks all over his skin and numbness in his hands and feet. A local shaman dismissed the symptoms as evil and said nothing could be done.

​Over the years, Joao's leprosy symptoms worsened. The numbness in his hands and feet meant Joao could not feel any pain caused by accidental wounds and damage. Eventually ulcers developed that would not heal and, without treatment, Joao lost his hands and feet to leprosy.

Thankfully, many years later, Joao received a visit from from the Hansen’s Disease programme. He was taken to the centre for treatment and care. He was offered artificial legs, but he did not like them and decide to return to his home and live alone. However, Dr Tony’s team persisted with his care, visited him and provided him with orthopaedic aids.

He still receives regular visits, and the centre provides him with basic food and self-care advice.

“Hansen’s Disease has a cure”